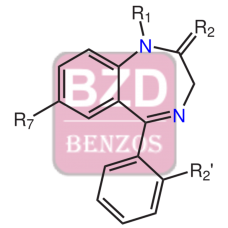 Our Benzodiazepine - BgG product is an Antigen Conjugate based on a BGG (Bovine Gamma Globulin) carrier, attached to proprietary Benzodiazepine derivatives.

A benzodiazepine (sometimes colloquially referred to as a "benzo", and often abbreviated in the literature as a "BZD") is a psychoactive drug whose core chemical structure is the fusion of a benzene ring and a diazepine ring. The first benzodiazepine, chlordiazepoxide (Librium), was discovered accidentally by Leo Sternbach in 1955, and made available in 1960 by Hoffmann–La Roche, which has also marketed diazepam (Valium) since 1963.