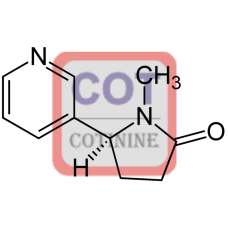 Our Cotinine-3 - HRP product is an Enzyme Conjugate based on a HRP (Horseradish Peroxidase) carrier, attached to proprietary Cotinine derivatives.

Cotinine is an alkaloid found in tobacco and is also a metabolite of nicotine. The word "cotinine" is an anagram of "nicotine". Cotinine is used as a biomarker for exposure to tobacco smoke and has also been sold as an antidepressant under the brand name Scotine. Similarly to nicotine, cotinine binds to, activates, and desensitizes neuronal nicotinic acetylcholine receptors, though at much lower potency in comparison.